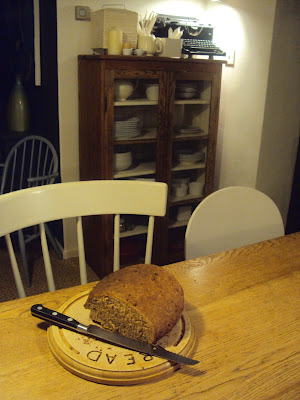 ‘A’ has been saying that he wanted to have a go at bread-making for ages now, which I think is a really cool thing for him to do. I made some after ages when we were snowed in a couple of weeks ago. I raided the cupboard and found a bag of Waitrose Malthouse Bread flour with a recipe on the bag and a packet of dried yeast that was just out of the sell by date. But it worked fine.

Anyway A had a go today and it tasted even better. He is an amazing cook anyway looks like he’s going to be a great baker too.

Here’s the recipe off the packet I don’t think they’ll mind if I reproduce it:-

1. Mix together the flour, yeast, salt and walnuts. Add the honey and the water and mix with a round bladed knife to make a soft dough, adding a dash more water if the dough feels dry.
2. Turn out onto a lightly floured surface and knead for 10 minutes until smooth and elastic.
3. Put in a lightly oiled bowl. Cover with cling film and leave in a warm place until doubled in size, for about 1 hour. Use your fist to punch the dough so the air is released. Pat into a rectangular shape and drop into a greased 900g loaf tin. (We just used an oiled baking tray.) Cover loosely with oiled cling film and leave to rise again until doubled in size. Preheat the oven to 220degrees centigrade, gas mark 7.
4. Dust with extra flour (I use olive oil instead) and bake for 25 minutes until golden brown. Tip out and tap the underside with your knuckles. It should sound hollow. If not, return to the oven (out of the tin if using one) for a little longer. Cool on a wire rack. Wrap and store for up to two days or freeze for a month.

Bread made with this flour is so tasty as it’s really treacly and malty. I think it would be lovely with the addition of dried fruit like raisins, figs or dates. The bread tasted even better to me this time. I’m not sure if that’s because we only had 500gms of flour left and so added 100gms of plain white flour. Because ‘A’ made it and he is stronger than me and so kneaded it much better than I could ever. Or just because he made it and things always seem to taste even better when someone else makes them for you........
....and the smell of the yeast brought back childhood memories for him of standing watching the lady who used to come to their house to make bread for the family. She would make a special little nan for himself.

It makes a loaf with a lovely crunchy crust and yummy chewy centre.
Posted by debby emadian at 10:56