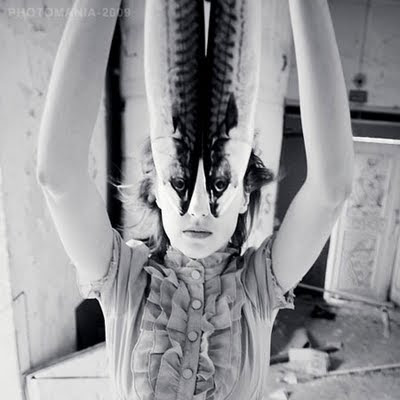 Mum would make sure that we ate fish once a week. Usually plaice with parsley sauce, mashed potatoes, carrots and garden peas.

Occasionally she would fry cod in batter, cook chips and serve them up with mushy peas that she would buy in a little box that had a big white tablet in it that looked like dishwasher soap. They had to be soaked overnight before cooking with the tablet which was bicarbonate of soda. We'd eat the fish, chips and mushy peas with Saxa table salt, Sarsons vinegar and Heinz tomato ketchup.

She also used to try and give us cod liver oil capsules that we couldn't swallow. My aunty would try to conceal them in Jaffa Cakes, hoping that would work. I think we just wanted to have Codliver oil & Malt instead, which sounds disgusting but actually is sweet and malty...I must get some....that's if they still make it!

Anyway back to fish and chips....we don't often indulge in fish and chips except when visiting a British seaside beach in the autumn or winter and then it's compulsory to eat them out of the paper while the wind blows sand into the parcel. But it's a holiday and we just suddenly fancied some last night.....

yummy.....you can keep the chips, I'm not a big fan, but fish, sea salt, malt vinegar and good brown bread.....yum oh and of course mushy peas.....and a cup of ordinary tea, PG Tips with milk in it mmm......heaven...it just conjures up so many good memories. 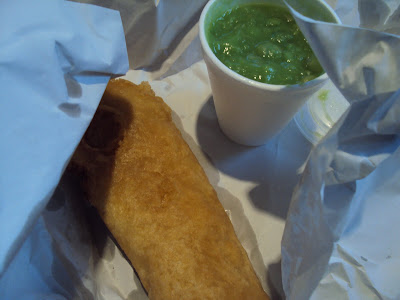 .........the fish love and the rest of the family?............not so much........
so with 'H' being home at the moment I tried to tempt her with cheese...... I conjured up this fish pie recipe, which she really loved........
You will need:
. Four medium sized potatoes.
. One leek
. Two fillets of white fish
. Two fillets of salmon or rainbow trout. ( I used one trout which I cut into two fillets.)
. Fresh or cooked prawns about 150gms.
. Milk or alternative eg soya or rice milk.
. A desertspoonful of cornflour.
. A bay leaf.
. A little grated Cheddar cheese.
. Sea salt and crushed black pepper.
Any fish combination would work well, whatever you have to hand. Smoked fish is really good in this but don't forget to check the seasoning because it can be a little salty.
Method:
Peel and cube the potatoes and cook in salted water.
Place the fish fillets into a saucepan. I used a heavy cast iron frying pan. Pour enough milk (or alternative) over the fish to cover. Add a bay leaf and season. Gently cook the fish in the milk. Also add the prawns at this point if using fresh ones. If using ready cooked ones reserve them until you return all the cooked fish to the leek sauce. 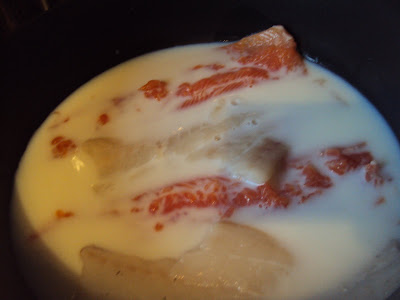 Meanwhile slice the leek and wash thoroughly to remove any trapped soil. 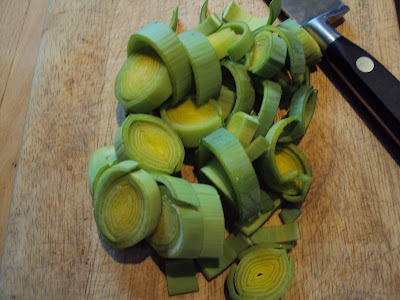 Cook the fish until it's opaque and just cooked....a few minutes on from the stage pictured below. 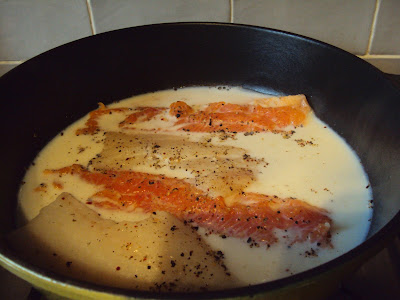 When cooked. Remove the fish with a slotted spoon and place in a bowl to cool a little. Add the leeks to the seasoned milk in the pan and cook until soft. 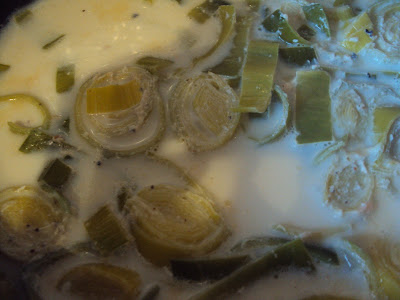 Drain the potatoes and mash them till light and fluffy, adding a little butter and milk or soya alternatives. Adjust the seasoning if necessary.

Whilst keeping an eye on the sauce, flake the fish in the bowl, removing any bones and bits of skin. Clean hands are the best tool for this. 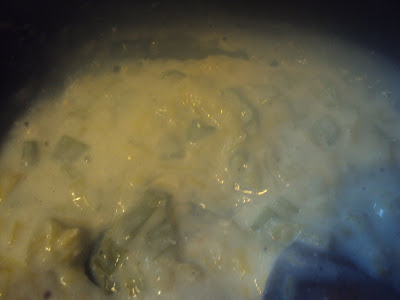 When the leeks are soft and have cooked down,mix the cornflour with a little cold milk to make a creamy paste. Add the paste to the sauce and cook for a few minutes until it thickens. Stir continually at this point to prevent any lumps forming.
Add the flaked fish and prawns to the leek sauce. Mix through taste to ensure the seasoning is ok. Remembering that if you're going to use cheese for the topping you may need to hold back on the salt in the rest of the dish. At this point add the cooked prawns too if using. 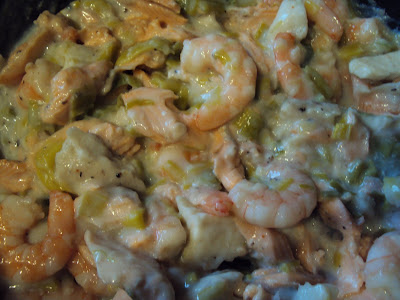 Spoon the mixture into an oven proof dish or divide between four small ones. 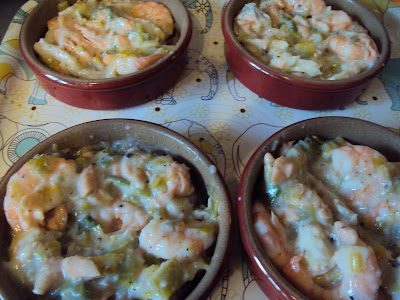 Top each dish with the mashed potato and fork ridges on top to make nice crusty crunchy bits when baked in the oven. 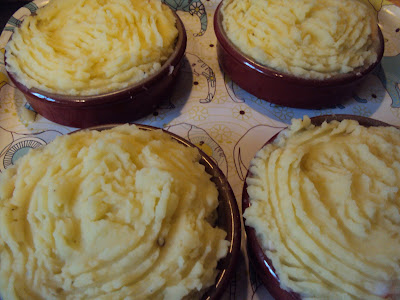 At this point top with grated cheese if using. Remembering that if you do decide to use cheese make sure not to over-season the other ingredients because cheese can be quite salty.
n.b. these can be frozen at this stage. Just defrost and as below when required. 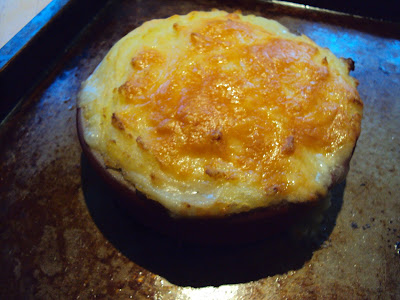 Place the dishes on a baking tray to protect your oven from drips and cook for about half an hour in a moderate oven about 180 degrees C.
By which time the topping will be all golden and chewy and the filling should be cooked through. 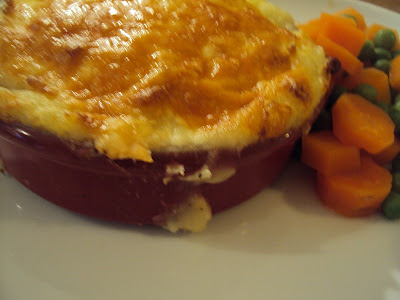 Serve with seasonal vegetables. I used ordinary orange carrots and frozen peas as fresh ones are out of season, for sentimental reasons. 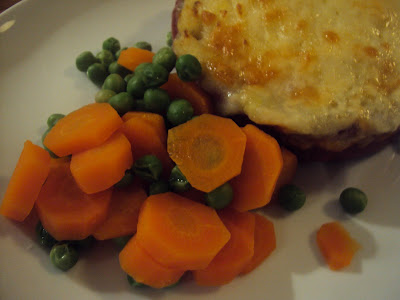 I might even try mushy peas next time. You can make a more up to date alternative by blending cooked fresh garden or frozen peas (mum would have used dried Marrowfat ones) with a little cream (creme fresh or dairy free alternative), butter and seasoning. 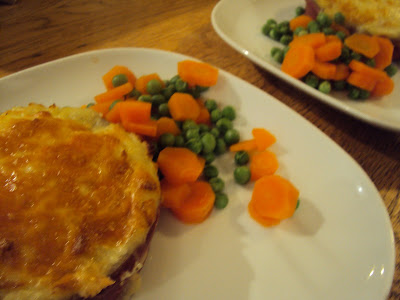