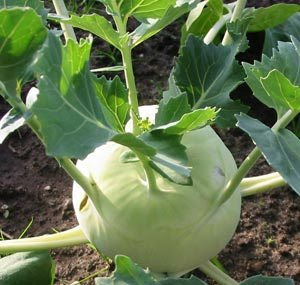 The great thing about belonging to an organic veg box scheme is that it does encourage you to try vegetables that you otherwise might not. Not that you haven't previously chosen them out of a kind of veggie prejudice, but just because you're not really sure what they are, or how to cook them.
Last week there was a kohlrabi in my box. It's a slightly unusual looking vegetable. I think that's due to the tentacle-like things attached to it. I have heard it described as alien looking...it is a little bit, but only in the nicest possible way. I think they are quite attractive. Mine was a delicate shade of pale green but there are also white and purple varieties.
They can be eaten raw or cooked and they belong to the cabbage family. I think they have a much milder flavour than cabbage, a little bit more like broccoli stalks and the texture is similar too.
I decided to try using mine in coleslaw as a quick google provided a number of slaw recipes and so I used my usual recipe which relies on taste and no specific quantities.
I used approximately:
A couple of small carrots
Two small green apples
One small onion
One small kohlrabi
Mayonnaise
A little cider vinegar
Sea salt and crushed black pepper
Simply peel and grate all the fruit and vegetables and then dress with a couple of tablespoons of mayonnaise thinned with a little cider vinegar. Season and give a good mix, taste and adjust if necessary, then put into a serving dish.
I really loved this slaw. I think it had a much lighter flavour than had it been made with cabbage and
It somehow made me feel a little bit less guilty about eating potato chips....especially because I'd used low fat mayonnaise 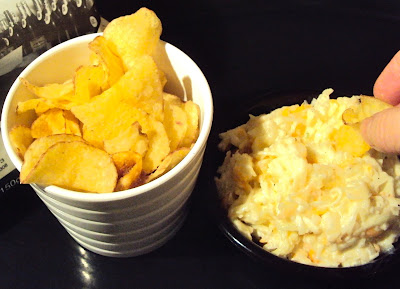 It looks as though I've used an awful lot of mayonnaise in this but believe me I didn't. The flesh of the kohlrabi is quite light and creamy in colour that's all kohlrabi you can see and not mayonnaise....honestly.....
Posted by debby emadian at 03:32