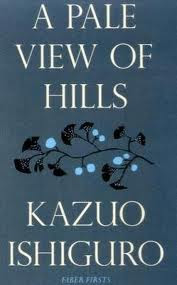 The first novel that I chose to read in 2011 after taking the following pledge.....

...was 'A Pale View of the Hills,' by Kazuo Ishiguro. I was a little bit disappointed with it. Maybe I was expecting too much....He's won tons of awards for his writing including an O.B.E. for services to literature.


This is the first of his works that I've read, and the first that he wrote. You know when you go to see a film that everyone's talking about and been nominated for loads of awards but when you finally get to see it, it's a bit of a let down....you don't like it?!
Well that's how I felt with 'A Pale View of The Hills'.
...Maybe it's just me....but I found it clumsy, kind of awkward....a bit cold. I was slightly unnerved too that the narrative involved a small child constantly being left at home alone. Silly of me because I've read much worse things in novels. I wondered why Ishiguru was not only telling a woman's story but writing as the woman.....and when I'd finished reading it I kind of felt that the story wasn't worth telling....exactly what was he trying to tell me.....
I recognise that some of this could be his way of portraying the formality of the traditions of his Japanese heritage, something I know very little about.
It must be difficult writing from the perspective of the opposite gender but I've read examples by authors who've done it really successfully. Like 'A Thousand Splendid Son's' by Khaled Hosseini. I think he told a woman's story sensitively. Not only was it compelling, it rang true, and it was beautifully written.