The Hour and other recent TV viewing 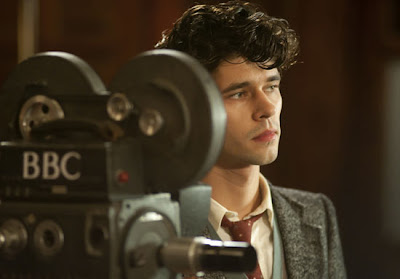 "I do not know what it is about you
that closes and opens; only something in me understands,
the voice of your eyes is deeper than all the roses,
nobody, not even the rain has such small hands."
It's the last episode of The Hour tonight and I thought there were two more left. I'm really going to miss my little step into 1950's London. I will miss Freddie Lyon, there will be a small hole in my Tuesday evenings. There have been some really bad reviews and I think Romola Garai isn't that convincing as Bel....but the story is exciting with lots of spies and intrigue...I do hope there's going to be a sequel if just to watch Ben Whishaw's portrayal of Freddie Lyon for these reasons alone.

Other TV viewing recently was the film Glorious 39 also starring Romola Garai it was beautiful to watch for the settings and costumes. I couldn't help but compare a few similarities with I capture the Castle.  Beginning  with the casting...Romola Garai and Bill Nighy again, elaborate receptions involving wealthy families, grand houses and the same decade.

Once I'd stopped making comparisons I loved Stephen Polikoff's film for it's exciting plot. I was glued to the sofa...I was just a little bit disapointed at the way everything suddenly came to a conclusion as though he'd  run out of time.  I would watch this again just for the costumes and the film sets.

We even watched the UK premier of Twilight last week. I know that it's target audience is probably teenage...but we both got hooked and watched two one hour long programs...it was a double bill.   I can understand why it's had such acclaim...I think there was some really good acting by Kristen Stewart and Robert Pattinson and amazing effects...I wonder when the next episode will be...
Posted by debby emadian at 07:03