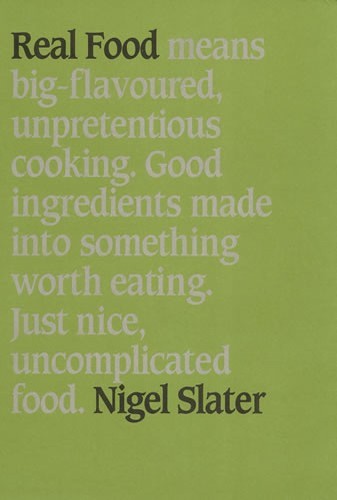 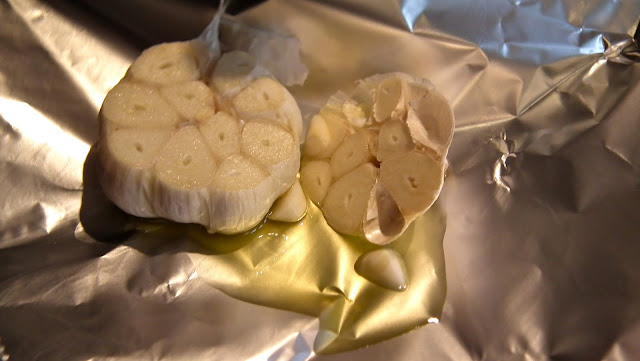 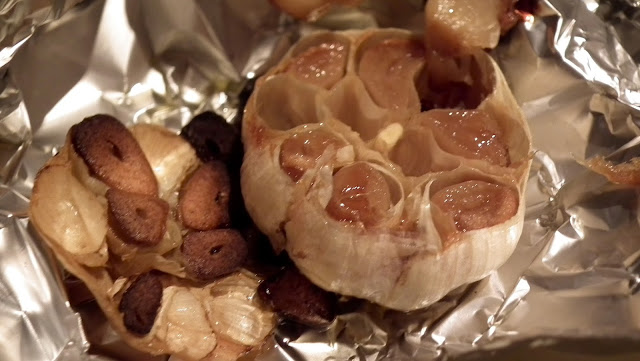 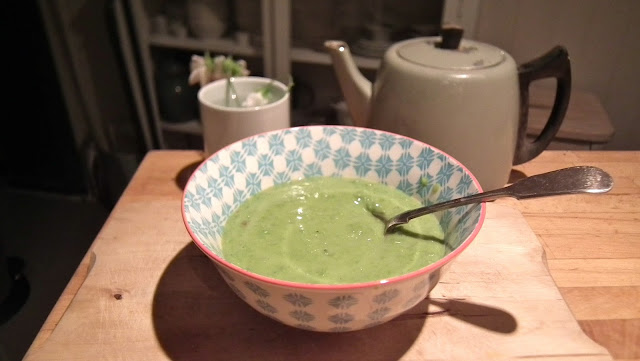 This month's Recipe Challenge was good fun. "...If you had ten seconds to grab a book, which one would it be..."

It was a toss-up between Sophie Dahl's, Miss Voluptuous Delights and Nigel Slater's Real Food. But in the final ten seconds Real Food won. The irony is that when  opened, it randomly turned to page 149 and a Nigella Lawson recipe for Pea and Garlic soup. So not even a Nigel Slater recipe. If I was a gambling person I would have bet on it being Green Chicken Curry as that's the page it's most often opened at.

A bit scary at first. I didn't thing that pea and garlic would be a perfect combination. But on the contrary it turned out to be the most comforting mellow soup, even though it contains a whole head of garlic. The garlic is roasted until mild and caramel and adds a lovely soft sweet garlicky hit...mmm...

To make the soup you simply chop the top off the head of garlic. Make a little foil parcel for the garlic and trickle the olive oil over the top. Then roast in a moderate oven, about 200c/gas mark 6 for about an hour until they are soft. Cook the peas and then whizz up with the garlic, grated cheese and some of the stock until smooth. Return to a saucepan and add the remaining stock. Season with salt and pepper and add cream if using.  Then serve.

I didn't add any cream but you wouldn't know...no-one guessed.This is a lovely soup that I will definitely make again. The actual work involved is minimal. The garlic takes an hour to cook but you can just leave it and get on with other jobs in the meantime. And as it took up so little room in the oven I was able to bake a crumble and some bread at the same time. One of the best things is that contains the kind of ingredients that I usually have in the fridge or freezer so can easily be made for unexpected guests.

Thanks to Dom I've discovered another winner...