If you have a brain that works like mine (going off on a million tangents all at once) you can easily be transported on a magical mystery tour into the past...just from one little recipe.  No wonder I rarely drink alcohol...my husband 'A' tells me that I'm already at least one glass up on everyone else, without even touching a drop!


This month, Dom of the Belleau Kitchen is joining up with Jac from Tinned Tomatoes for a joint Random Recipe and No Croutons Required challenge. For the challenge you have to randomly select a soup recipe and if it's not vegetarian,  just mix it up a bit so that it is.  It sounded like fun...


So I picked up The New Soup Bible and opened it randomly at page 168 to Moroccan Chicken Soup with Charmoula Butter and before you could say 'Sancho Panza' I was on a boat sailing from the port of Algeciras at the southern edge of Spain, to Ceuta in North Africa...


But it all started long before then...


When I was a little girl we lived with my maternal grandparents and my aunty, who as well as being a local artist did an important job,  that she told us required signing the official secrets act...maybe she was a spy! She painted abstract paintings, and blue and green portraits and big red nudes in her studio upstairs.  The nudes always seemed to be big fat red ladies, and I didn't like them.  I'm sure they were very good and I'm not sizist at all...if there is such a thing...but for some reason as a little girl I had an aversion to them.


On Saturday afternoons I sometimes watched old black and white movies with my granddad and 'little nanny'  in their living room.  I remember lots of old Betty Davies movies, and films with safaris in African jungles with beautiful Grace Kelly and Ava Gardener  dressed in safari suits, who would disappear into a tiny tent, only to reappear a second later clothed in beautiful evening dresses, with perfectly choiffed hair. It became an obsession with me to go to the continent of Africa one day...I didn't really care which country in Africa. The whole continent sounded  romantic to me. I read everything I could about it. 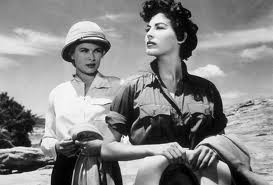 So when some years later I went on holiday to Southern Spain with a group of girlfriends and discovered just how close we were to North Africa, I couldn't settle until we'd bought tickets and sailed over for the day.  I loved it. It wasn't the romantic jungle with warriors killing lions and tigers with spears, and ladies in safari suits and beautiful gowns falling in love with alpha males.  But I thought it was amazing and funnily enough my memories are food related.


We arrived at siesta time.  Everywhere was closed and so we hired a six door Mercedes to drive us to the borders of Morocco. We were starving and the driver took us to a Hotel.  He knocked on massive big double wooden doors that opened onto a lively courtyard, full of people sitting at long wooden tables enjoying lunch.  We ordered paella that was served from the most enormous beaten metal  paella pan, saffron yellow with prawns and clams and mussels and then we drank sherry that was so sweet and dark that it was almost black, called Malaga Virgin.  I'll never forget that meal... 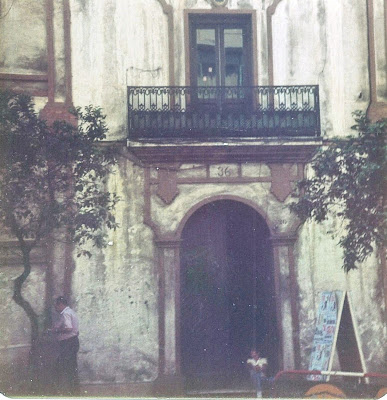 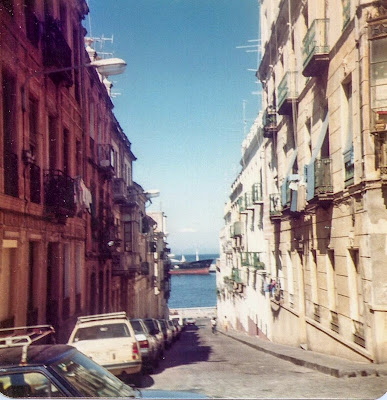 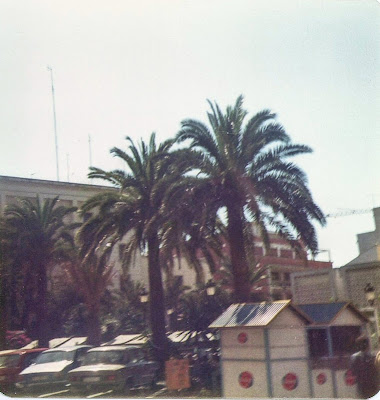 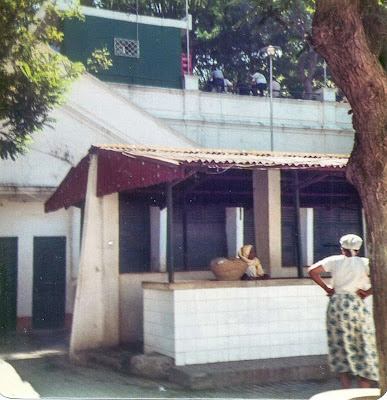 That's where Dom and  Jacs' challenge took me....I only needed to see the word "Moroccan"and I was off on a metaphorical magic carpet ride...


I adapted  my random recipe to make Spicy Moroccon Squash Soup with Charmoula Butter by substituting the chicken with butternut squash....and it was amazing.


Here are the ingredients you'll need:

This soup is absolutely delicious.  It's a very substantial autumn or winter recipe.  If allowed to reduce a little more it would make a great accompaniment to couscous, quinoa  or rice.  The variations are endless.  It would work with any root vegetable and would be nice with spinach or chard added.  For meat eaters prawns or fish would work well too and of course the chicken that the original recipe required. 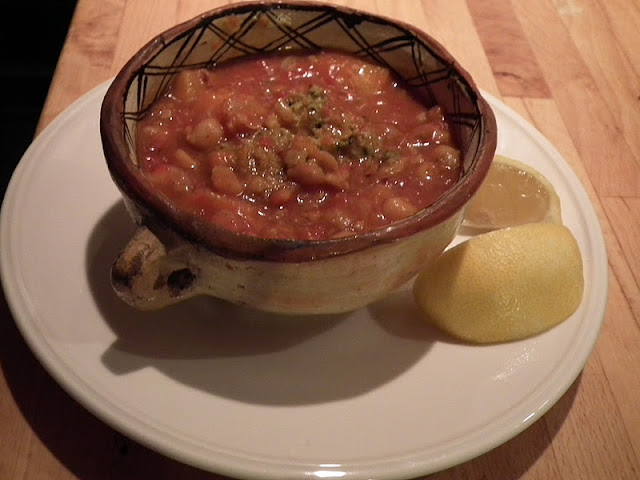 This isn't the most photogenic dish (at least my version isn't) it looked much better when the butter had melted in...but what it lacks in beauty it definitely makes up for in taste ...


The chamoula whilst butter-heavy is an amazing addition and would make a great  stuffing for chicken or turkey.  I think it would work really well sandwiched into the cavity made in a chicken when you lift the breast skin up; I'm sure that it would result in a really tasty moist chicken....mmm...the possibilities are endless...(sorry veggies)