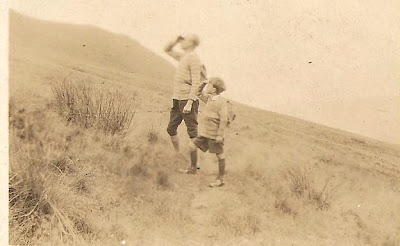 As a child I always remember doing my fair share of dish washing, but I do also remember that there was an unwritten rule that women cooked the food and men washed the dishes. As everyone gradually left home, dad (who looks so cute hiking with his father) would always wash up. I also remember my maternal grandfather putting on a butcher's stripe apron and filling the huge Belfast sink (that you could sail a small boat in) and working his way through a mound of dishes. I also have a memory of hearing a little shriek one day as he found a sharp knife amongst the foaming Fairy Liquid bubbles.

'A' is sweet and will wash the dishes, especially if we have visitors but I never saw his father wash them. He was a lovely kind man, but washing dishes was definitely women's work. There was a clear defining line between women's and men's roles. Women's domestic and men's secular. I have to say that it's never been a favourite chore of 'A's and the first thing he bought me when we got married was a dish washer.

Myself? ........I do quite like the feel of the warm soapy bubbles and the satisfaction of a pile of clean crockery draining in a rack......but it's great to have a machine that does the job for you, there are so many other things I'd much rather be doing...

'H' thought I'd be amused by a passage on the effect of dish washing on women, that she found in 'The Jungle' by Upton Sinclair that was written in 1906:- 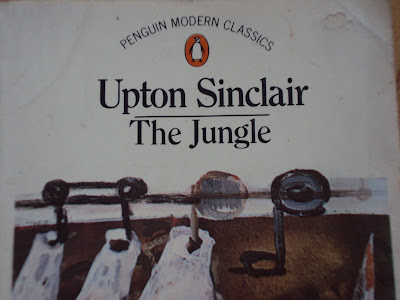 "....consider one single item, the washing of dishes. Surely it is moderate to say that the dish-washing for a family of five takes half an hour a day; with ten hours as a day's work, it takes therefore, half a million able-bodied persons - mostly women - to do the dish-washing of the country. And note that this is most filthy and deadening and brutalizing work; that it is a cause of anaemia, nervousness, ugliness, and ill temper; of prostitution, suicide, and insanity; of drunkard husbands and degenerate children - for all of which things the community naturally has to pay. And now consider that in each of my little free communities there would be a machine which would wash and dry the dishes, and do it, not merely to the eye and the touch, but scientifically - sterilizing them - and do it at a saving of all the drudgery and nine tenths of the time!"

No wonder 'A' bought me a dishwasher to stave off the anaemia, nervousness and ugliness...not to mention the other things!!
Posted by debby emadian at 23:37