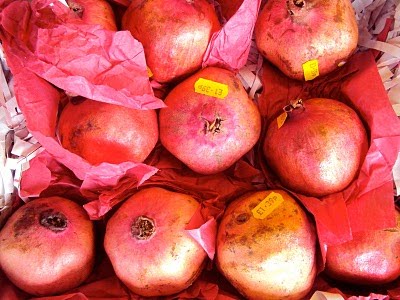 Here's the recipe for Fesanjoon (or Fesanjan) - Persian chicken cooked in a walnut and pomegranate sauce. It's probably one of the easiest Persian dishes to cook and yet somehow seems one of the most luxurious. But you do really need to get traditional Pomegranate Molasses to get the authentic taste, a mildly sweet/sour flavour.

You can find Pomegranate Molasses in Iranian Delicatessens and even some supermarkets ranging from Sainsbury's and Waitrose to Harrods amazing Food Hall. Obviously the price depends on where you source it, but Melbury & Appleton who run a little independent deli in Muswell Hill, North London have a classy online store and sell it for £2.99 for a 3ooml bottle and they ship worldwide. You may find it called Robe Anar which is the Persian (Farsi name) or
Dibs-Al-Rumman which I think is Israeli.

To make Fesanjan for four people you will need:
Method: 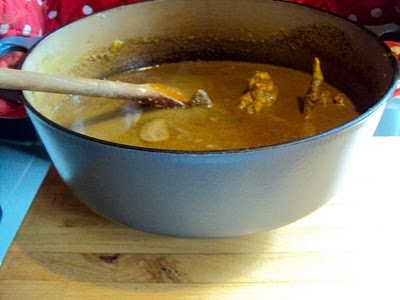 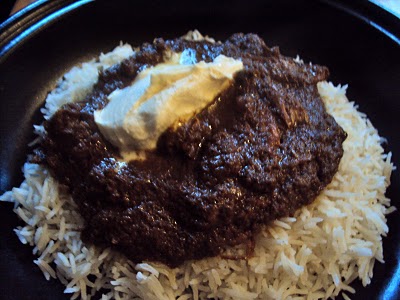 Fesanjoon/jan is traditionally served with boiled then steamed Basmati rice. Then afterwards fruit such as pomegranates or oranges are eaten. This is to balance the 'heat' of the food.

An important part of Persian diet is the balance between 'hot' and 'cold' foods. Fesanjoon contains lots of walnuts and honey which are both classified as hot foods whereas citrus fruits and pomegranates are cold so the whole meal is balanced perfectly. It's thought that if this balance isn't correct it can cause ill health.

From my experience Persian food isn't difficult to make but you do require the correct ingredients and often patience chopping lots of herbs or waiting for food to cook. I learned at my mother-in-law (an amazing cook's) elbow. I watched her, listened to her instructions, a word in English, twenty in Farsi and hundreds of gestures, made notes and then tried them out for myself. Fortunately my husband followed in her footsteps and he's an awesome cook too.

Besides rooting through my countless handwritten notes or recipe's I've found a gem in The Legendary Cuisine of Persia by Margaret Shaida. Margaret Shaida was born in England and married an Iranian man and went to live in Tehran in 1955. Like me she learned Persian cooking from her mother-in-law friends and family. Her book written in 1992 has been like a bible to me. Not only does she provide the recipes but also alternative ingredients if the original ones are hard to find, a great glossary, list of hot and cold foods, background history to the dishes as well as social and traditional aspects of this amazingly rich cuisine.