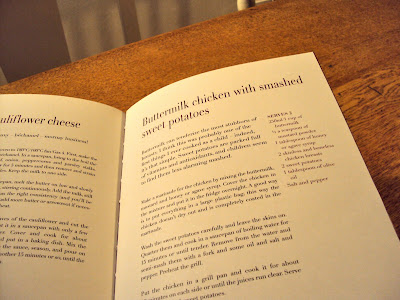 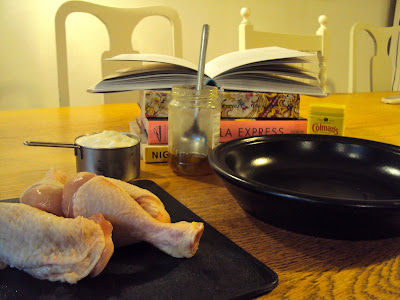 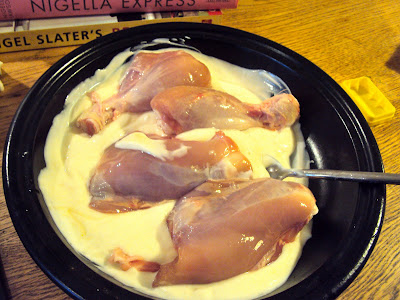 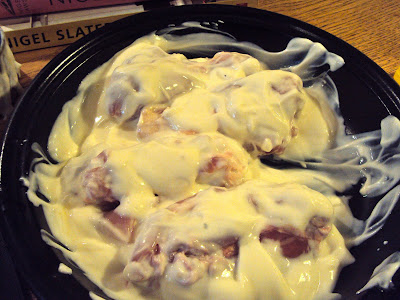 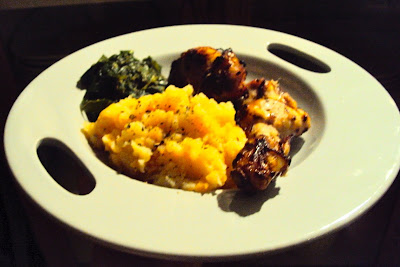 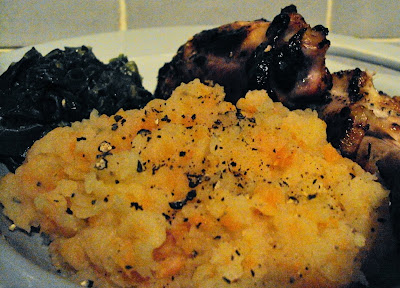 I suddenly realised that I'd been neglecting my project of working through the recipes in Miss Dahl's Voluptuous Delights.
So I've caught up a bit by trying out two recipes. The first one was for Buttermilk Chicken with Smashed Sweet Potatoes. You can find the recipe on page 119 in the Winter Suppers section.
As usual, I didn't have all the ingredients to hand and so improvised a little. Basically the premise of this recipe is chicken breast marinated over-night in buttermilk to make it lovely and moist and tender, with the addition of honey and mustard to give a nice mellow flavour. It's then grilled for ten minutes or so until the juices run clear. This is served up with boiled and then smashed i.e. semi-mashed and not mashed....sweet potatoes with a little olive oil and seasoned with salt and pepper.....mmm...my kind of food.
I didn't have any buttermilk so substituted it with a nice sour live yoghurt. Nor did I have any sweet potatoes so made a mash from a combination of root vegetables, potato, swede and carrots. I used chicken thighs and legs and left the bones on because 'A' isn't too keen on breast meat. I left it on the bone for flavour.
I'm a big fan of chicken thighs because they are less expensive and much more flavourful than breast meat. I could easily have removed the bones and flattened the meat to resemble breast meat. I used to do this all the time for H when she was little because she didn't like the legs and couldn't tell the difference. She now does this for herself....and for her boyfriend who has the same dislike...although they cook together in their student house...so he knows....she's not deceiving him....
'A' loved this dish and wolfed the chicken down and said he would happily enjoy eating this meal again. I ate mine, but was a little less enthusiastic. I needed to add salt and lots of crushed black pepper and think I would add these to the marinade in future.
As usual Sophie Dahl chose to use wholesome ingredients, which I was really happy with. Her instructions are simple and easy to follow and best of all she really loves my kind of food. I think if I was scoring I would give this recipe a 7/10 but this may be unfair as I used yoghurt and not butter milk so it probably affected the flavour. Next time I will try it with buttermilk....watch this space.....
Posted by debby emadian at 05:07