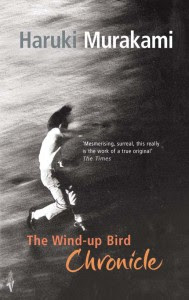 At 607 pages The Wind-up Bird Chronicle by Haruki Murakami is quite a tome.  It was originally published as three separate books, (The Thieving Magpie, Bird As A Prophet and The Bird Catcher,) which if you don’t enjoy could prove to be hard work.  I have to say that for me this has been a bit of a roller-coaster read.

But his narrative had me hooked from page one (p5):
“ When the phone rang I was in the kitchen, boiling a potful of spaghetti and whistling along to an FM broadcast of the overture to Rossini’s The Thieving Magpie, which had to be perfect music for cooking pasta.”
However if it wasn’t for the beautiful way that Murakami writes I think that I could just as easily have been turned off. The plot is very surreal, and a couple of  times shocking even horrifically violent. But I’ve probably read far too much Jane Austin in my life.  A couple of times I was almost embarrassed by what I was reading, for example when the character Lieutenant Mamiya related his ‘long story’ that included a sordid act of cruelty that he witnessed as a young man and subsequently haunted him for the rest of his life. I wondered if it really was pertinent to the plot.  But I soon began to realize that Murakami’s writing is not really about plot.
It is much more true to life than that, and yet at the same time, so far from it.  There were times when he was able to portray a human emotion so completely in a way I’ve never seen before, yet his use of phenomena such as astral projection often confused me as to whether the main protagonist was actually experiencing events or dreaming. But both are parts of human existence, so I suppose, why not?
I loved his turn of phrase, his chapter titles; there were often two to one chapter. For example chapter 3, ‘Malto Kano’s Hat – Sherbet Tone and Allen Ginsburg and the Crusaders’ or chapter 9 ‘Culverts and an Absolute Insufficiency of Electricity – May Kasahara’s Enquiry into the Nature of Hairpieces’ (You may have noticed the influence on my own post titles!) He made me want to read works by Tennesse Williams and Hemmingway’s A Farewell to Arms.
There were times when I wanted to shake the main protagonist Toru by the shoulders and ask 'can’t you see what’s going on, why are you so gullible?' or 'why don’t you get a job?’ But then he became like a friend whose weaknesses I overlook. I began to appreciate that, had he not been such a passive character the story would never have unfolded.
I have to say that I'm really glad that I've now finished reading this book, and it's one I wouldn't want to return to.  It took me a long time to read, partly because I put it down to concentrate on other things and it just happened to be at a rather sordid point and I found it hard to pick up again...and yet I had to continue. Whilst I wouldn't actually recommend this as a fun read, I've noticed a copy of Hard-boiled Wonderland and the End of the World' (another great title) by Murakami in H's room and read the description on the cover, and I know it will be another beautifully written story...but I'm not quite ready for another roller coaster ride just yet!
I am looking forward to reading Barbara Kingsolver's new novel The Lacuna...Mexico, 1935, Frieda Kahlo, Diego Rivera, Leon Trotski, art, revolution...I can't wait to start...
Posted by debby emadian at 23:36