I came to Madam Bovary not knowing anything about the book, except that it’s held up as a great example of 19th century classical French literature.
I didn’t read it in French as mine is no-where near good enough, but read Margaret Mauldon’s 2004 translation. Interestingly as I don’t usually go in for novels with copious adjectives, I was really drawn to Flaubert’s beautiful use of language.  He painted the most amazing vignettes of daily life. Little moments, still-lifes, that drew me in. Like on page 16:
“…a smell of orrisroot and damp linen came from the tall oak press…”
or  page 21
“The sunlight, shining through the slats in the wood, fell across the flagstones in long narrow stripes that broke where they came up against the furniture, and flickered on the ceiling. On the table, flies were crawling up the glasses left from the last meal, and buzzing as they drowned in the remaining dregs of cider.”
Then as I read of a village wedding on pages 25 and 26, I was instantly looking at Samuel Luke Fildes painting of the same name. 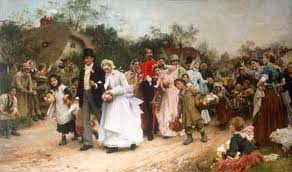 image via
There was even humour of sorts.  I can’t relate any specific examples but I found myself chuckling on a number of occasions.  Nothing major, just gentle little funny incites into human behaviour.
I was so taken in by Flaubert’s prose that the actual narrative became secondary to me. In fact his attention to detail was so great, especially when describing the decor of a room, or a character’s dress down to the most minuscule detail of the stitching on a hem, or the number of buttons on a cuff, that it seemed almost feminine. I genuinely wondered at one point if Gustave Flaubert was actually the nom-de-plume of a woman writer, just as George Sands was.  (I’ve just googled it and it wasn’t)
In many ways Madam Bovary is the complete antithesis to the last book that I read, The Poisenwood Bible by Barbara Kingsolver.  The latter described poverty, starvation, sacrifice and denial, whilst the former, decadence, waste, selfishness and indulgence eventually leading to self-destruction…although in hindsight I think that there were elements of all these things, in both novels.
I almost found myself feeling sorry for the main protagonist Emma. I tried to analyse what would ever make a women sabotage relationships with the only people who genuinely had any true love and affection for her, in such a violent and selfish way.


But it’s a deep discussion and I’m sure that Flaubert had lots of themes going on in this novel. I wondered if by allowing his character to echo the same behaviour of the men that she was so infatuated with, to the point of neglecting all other relationships, that he was actually making a shout out to feminism.


Maybe he was trying to readdress the balance in the world of literature. But I think that’s another topic and I'm probably getting a bit out of my depth here...


I thoroughly enjoy reading Madam Bovary in the same way I love Cannery Row by John Steinbeck, for the simple way the he describes the minutiae of every day life...
Posted by debby emadian at 04:22